We believe that the Lord Jesus Christ, the eternal Son of God, became man, without ceasing to be God, having been conceived by the Holy Spirit and born of Mary, a virgin, in order that He might redeem and reveal God to sinful people.  He was subject to temptation, yet was without any sin.  We believe that Jesus Christ accomplished our redemption through His death on the cross as a representative, vicarious, substitutionary sacrifice; and that our justification is made sure by His literal, physical resurrection from the dead.

We believe that the Lord Jesus Christ ascended to Heaven and is now exalted at the right hand of God where, as our High Priest, He fulfills the ministry of Intercessor and Advocate.  He is the Messiah for Israel, the Saviour of the world, and the only way anyone can come to God the Father for forgiveness of sins and everlasting life; and He is to be worshipped and glorified as the Lord.

We believe that the Holy Spirit is equal with God the Father and God the Son and of the same nature; that He was active in the creation; that He convicts of sin, of righteousness, and of judgment; that He bears witness to the truth of the Gospel in our preaching and testimony; that He is the agent of the New Birth; and that He seals, fills, leads, intercedes, teaches, sanctifies, and comforts the believer.

We believe in the Scriptures of the Old and New Testaments as inspired by God, inerrant, and preserved in the English language in the KJV, and that God's word is supreme and our final authority in faith and life.

We believe the Genesis account of creation as being neither allegory nor myth, but a literal, historical account of the direct, immediate creative acts of God without any evolutionary process; that man was created by a direct work of God and not from previously existing forms of life; and that all people are descended from the historical Adam and Eve, first parents of the entire human race.

We believe that man was created in the image of God; that he sinned and thereby incurred not only physical death but also that spiritual death which is separation from God.  We believe that man was created in innocence under the law of his Maker, but by voluntary transgression fell from his sinless and happy state, in consequence of which all mankind are now sinners, not by constraint, but by choice, and therefore under just condemnation and without excuse.

We believe that the salvation of a soul requires a belief in God; repentance towards God, which involves genuine sorrow for sin and a willingness to turn from it; and faith toward the Lord Jesus Christ.  We believe that this salvation is thereafter permanent and eternal to the believer.

We believe that the new birth (being born again) is the regenerative act of the Holy Spirit upon sinners when they repent of their sins and believe the Gospel according to the Scriptures, receiving the Lord Jesus Christ as their personal Saviour.  As a result of the new birth, the sinner is made a new creature in Christ Jesus, partaking of the divine nature and receiving eternal life as a free gift of God.  Regeneration of the spirit, resulting in the "new man" and consequently partaking of the divine nature in the spirit is brought about in a manner above comprehension, solely by the power of the Holy Spirit in connection with divine truth.

We believe that the Lord Jesus Christ died for our sins according to the Scriptures as a representative and substitutionary sacrifice and rose again for our justification; and that all who believe in Him are justified on the ground of His shed blood and are saved by grace through faith wholly apart from human merit and works.

We believe in the unity of all true believers in the Church, which is the Body of Christ, and that all believers, from Pentecost to the Rapture (the resurrection of the church), both Jews and Gentiles, are added to this Church by the baptism of the Holy Spirit at the exact time that they trust in Jesus Christ as Saviour.

We believe that this true Church is manifested through the local church, which is a congregation of believers associated by covenant of faith and fellowship of the gospel; observing the ordinances of Christ; governed by His laws in accordance with Pauline revelation; exercising the gifts, rights, and privileges invested in them by His word; and that its officers are pastors (also called elders) and deacons, whose qualifications, claims, and duties are clearly defined in Scripture.  We believe the true mission of the local church is for the edification, perfection, exhortation, and comfort of its members in spiritual matters; and the faithful witnessing of Christ to all people as we have opportunity.

We believe that Christian baptism is the immersion in water of a believer, in the name of the Father, of the Son, and of the Holy Ghost, to show in a solemn and beautiful emblem our submission to and faith in the crucified, buried, and risen Saviour, through Whom we died to sin and rose to a new life.

We believe that believers commemorate together Christ's death until He comes through the Lord's Supper, which should be preceded always by serious self-examination and personal confession.  His great sacrifice of love is illustrated through the unleavened bread, which pictures His body that was broken for us; and the pure fruit of the vine, which pictures His blood that was shed for us.

Sean was born and raised in rural northwest Pennsylvania.  After graduating with a degree in construction management, his life and plans for the future changed when he gave his life to God in 2004 and knew God wanted him to preach and serve Him.  A week later, Sean moved to Ohio.  He attended Bible college part time while working for a custom home builder in the Dayton area.  Through that company, Sean had the opportunity to participate in and teach several Bible studies, and it was through those groups that Wellspring Baptist Church was started.  He is thrilled and grateful to be saved and a part of what God is doing here at Wellspring. 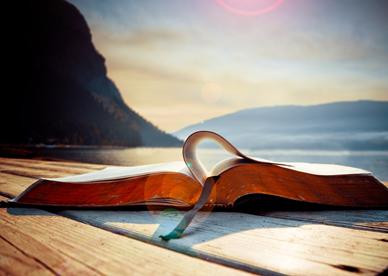 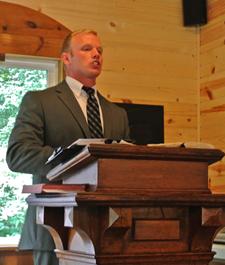 Sean and Rebecca were married in 2006 and love serving God, working in their construction and remodeling business, refinishing old furniture, and watching their kids play and learn together.  Shealyn, Owen, Troy and Finn like looking for bugs in the woods, fishing, and eating fresh-baked treats at church on Sunday mornings! 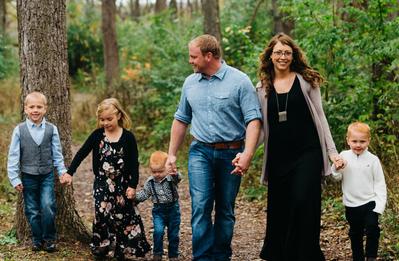 Please feel free to contact us with any questions or for a more extensive statement of faith.

We believe that God brought Wellspring Baptist Church into being!  None of us could have planned the events that led up to our first service here on August 11, 2012.

Several years before that, Dr. Gary Beall, on whose property our little chapel now stands, took a vacation with his family to Cumberland Island, Georgia.  While exploring the island, they came upon a little white chapel that over a hundred years ago was the First African American Baptist Church.  Though the church is out of use now, the door was unlocked.  There was a Bible on the pulpit and Dr. Beall read from it a passage from the Psalms.

​Feeling God's presence so real there in that old chapel inspired him to build a chapel of his own, here on his property in Springboro.  He says he wasn't really sure why (and some people even thought it was a little crazy!), but he found a clearing in the woods and started construction.  The first nail he pounded was the cross that hangs above the door at the back of the chapel.  Working mostly by himself on the weekends, Dr. Beall hadn't quite finished it two years later when his son Chip received Christ as his Saviour while preparing for a medical missions trip.

About a week later, Chip Beall met Sean Ireland at a Bible study.  Eventually, he told Sean about the chapel and an idea he had to hold a revival service there.  Chip introduced him to his dad and together they planned to hold the service that summer.  They set the date for Saturday, August 11, 2012, and started inviting friends and family.  With so much work still to do on the chapel, a bunch of volunteers from a men's Bible study group started meeting on Monday evenings to put in the floor and tongue-in-groove walls, finish the trim, and paint.  Someone offered to build the deck, and someone else came by one night with a beautiful steeple he had made.   There was a lot of laughter and fun and prayer together during those weeks!

Then, when it was almost done, somebody said, "Hey!  This could be a church!"

All of us here at Wellspring owe a debt of gratitude to Dr. Beall and his family for their Christ-like generosity and hospitality; because he immediately said, "Yes!"  The guys from the Bible study and their families started talking seriously about the idea, God opened one door after another...and that's how Wellspring Baptist Church got started.

So...that first revival service on Saturday night was followed by a worship service on Sunday morning, and every Sunday morning since.  We've moved since then to a little bit bigger chapel (and that story is all about the grace of God too), and God is still bringing people together and helping us all get to know Him better.  It has been great so far.  We can't wait to see what God will do for us and with us in the future!

We believe that there is one, and only one, living and true God, an infinite, intelligent Spirit, the maker and supreme ruler of heaven and earth; inexpressibly glorious in holiness and worthy of all possible honor, confidence, and love; and that in the unity of the Godhead, there are three persons: the Father, the Son, and the Holy Spirit, equal in every divine perfection, and executing distinct but harmonious offices in the great work of redemption.

Here are some examples of what people are saying...

"Wellspring has allowed me to find my spirituality and has impacted my life in a 100% positive way.  I found salvation and was baptized at Wellspring." - Marty

"We love being a part of Wellspring." - Jeff & Michael

"I am thankful for Pastor Sean and his faithfulness to preach the word of God.  I'm thankful for the church family and always feeling the presence of the Lord at Wellspring." - Chad

"The Lord dwells at Wellspring!" - Eric